Home Articles Why is landing on Mars so difficult? 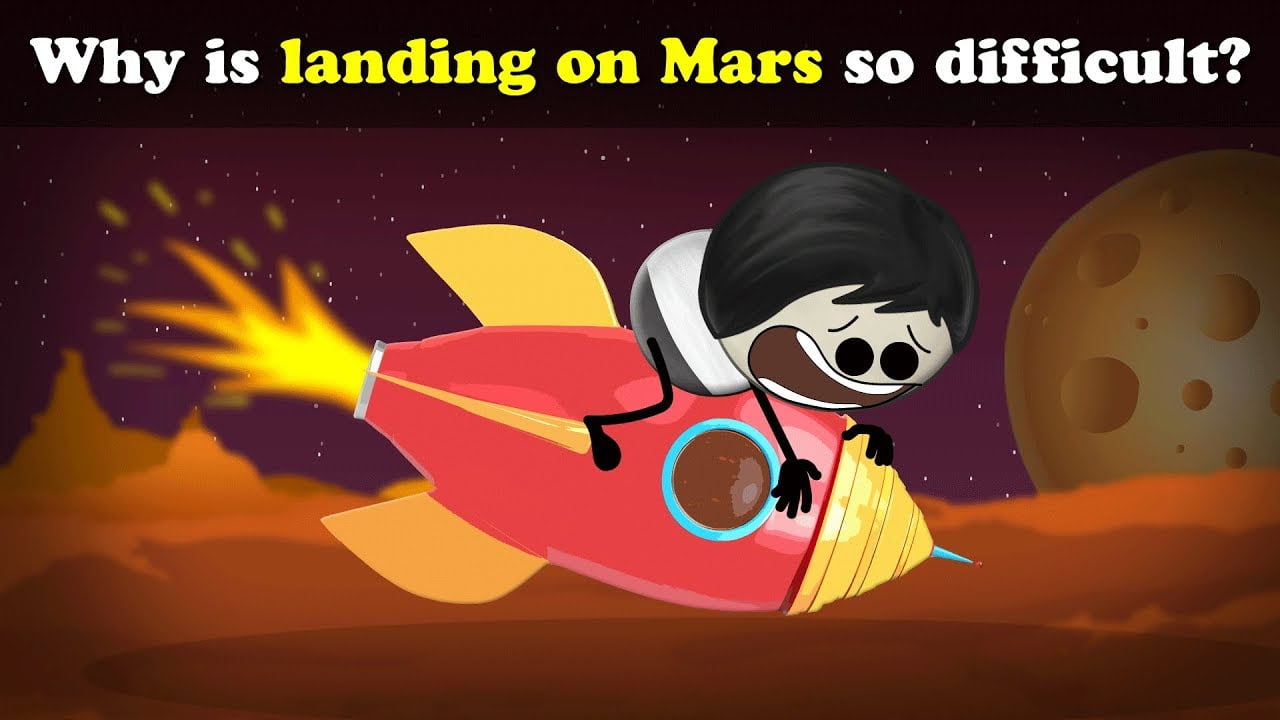 Why is landing on Mars so difficult? Because trespassing is prohibited on Mars. Oh listen. Before Mars, we successfully landed on earth and moon. Earth has a thick atmosphere. So, the advantage in this case is that. We can use parachutes to slow down the spacecraft. While, the disadvantage is that. The thick atmosphere creates frictional heating. Thus requiring heat shields. Now, as the moon has no atmosphere. The disadvantage is that parachutes don’t work. Hence we need complex retro-rockets. But the advantage is that no atmosphere means no friction. So no need of heat shields. Now, more than 50% of landings on Mars have failed because. We face both the above disadvantages here. Why? Because Mars’ atmosphere is 100 times thinner than earth’s atmosphere. So, parachutes are ineffective. Hence, we need complex retrorockets. Also, as the atmosphere is not completely absent. We need heat shields. As a result, the complexity of landing on Mars increases. Why is Pluto not a planet anymore? Because I am not silly anymore. Ya ya. Now listen. Pluto was discovered by Clyde Tombaugh in 1930. It is not considered a planet anymore because in 2006. Astronomers of IAU gave a new definition to the word planet. According to the new definition, a planet is a celestial body. Which is in orbit around the sun. Is spherical in shape. And it has cleared the neighborhood around its orbit. What does this mean? It basically means that using its gravity. A planet should have removed asteroids and dwarf planets, out of its path. Thus cleared its neighborhood. Now, Pluto is in orbit around the sun and is spherical in shape. But since Pluto’s neighborhood has many other objects. And it has not cleared its neighborhood. It is not called a planet anymore. Is Mars really red? Am I really human? Haha. Rocks and soil on Mars mostly contain iron. Here comes atmospheric oxygen. Reacting. Woahhh. Reddish iron oxide or rust is formed. So, Mars is red. Huh? Ahhhhaaaa. Let’s look through the rovers. Woahhhhh. Some areas are brown or green or even butterscotch-colored. Then, why does it look red? Dust Storms. They last for weeks or months. They kick up the rust into the atmosphere. Thus, giving it a reddish color. Topic: Gravity. Why are planets round? Because I commanded them. You wish. Planets are round because of the force of gravity. Gravity acts as if it originates from the center of a planet. And pulls each point of the planet towards it. Hence, the only way for everything on the surface. To be equally close to its center is to form a round shape. However, planets are not exactly round. They are roughly spherical. This is because planets spin on their axes. Just like a spinning top, right? Absolutely. When planets spin. Things near the equator tend to move away. From the center due to centrifugal force. Resulting in formation of an equatorial bulge. Because of this bulge. The equator of a planet becomes farther from its center than its poles. Creating a roughly spherical planet.